Central A/C & Heating Load Calculations – What You Need to Know

You’ll hear it called by a variety of names: Load Calculation, Manual-J, Heat Gain Analysis, Heat Loss, & more. If the HVAC Contractor doesn’t bring it up at all, you’ve got the wrong contractor!

I founded Magic Touch Mechanical, Mesa AZ over 20-years ago. Since then, we’ve replaced thousands of central air conditioners, furnaces, & heat pumps throughout the Phoenix, AZ Metro area. I’m a stickler for doing things the right way or not doing them at all. After all, it’s my name and reputation on the line.

For that reason, every AC replacement we do includes a Manual-J Heat Load Analysis (load calculation). As a result, we’ve never had an AC unit that couldn’t keep up with Arizona’s hottest summers – in two decades!

What is a Load Calculation?

Simply put, a load calculation is a mathematical formula that determines how many tons of A/C & heating is needed to cool/heat a home.

To be more precise, a heat load calculation is the only way to guarantee performance, comfort, temperature & humidity control.

What is a Manual-J Load Calculation?

This is a critical distinction for you the homeowner. The ACCA literally writes the standards for the HVAC industry to follow (should follow anyway). Often, code officials and contractor regulating agencies refer to ACCA standards. However, local codes usually require only “minimum standards”. In other words, you should hire a contractor that does more than just the “minimum” for the best result.

Your contractor won’t simply hand over their load calculation before they’ve been contracted to complete the work. They’ve put money and time into creating it, so rightfully it’s their intellectual property… you “purchase it” with the installation. However, it’s perfectly acceptable (and expected) to ask the contractor to see the data collected for the load calculation. It’s also okay to verify the software used is indeed, certified Manual-J.

At Magic Touch Mechanical we take things to the next level. We invite our clients to walk with us as we measure rooms, windows, insulation levels, etc. In my opinion, every homeowner should witness the level of detail that goes into making sure it’s done right. You’ll probably learn some things you didn’t know about your home in the process.

Why is the Manual-J Distinction Important?

Have you ever heard the saying, “garbage in, garbage out”? If not, it basically means if the data entered into the formula isn’t right, the resulting data output will be wrong.

What You Don’t Know Will Cost You!

I was inspired to write this article to help homeowners avoid a mistake we see all too often. More specifically, because of a mistake we saved a homeowner from making just this week.

Magic Touch Mechanical was 1 of 3 air conditioning companies called to provide a quote to replace an HVAC system. The 12-year old home had one 5-ton central air & heating system. One of the complaints about the existing system was the homeowner’s daughter’s bedroom was always too hot in the summer. It was also much colder than the rest of the home in the winter.

Both of our competitors quoted new 5-ton systems to replace the existing one. Upon inspecting the home, the ductwork, the insulation, the windows, etc. we ran our Manual-J load calculation.

The result: The home required 6.2-tons of cooling, not 5-tons!

We discovered another issue as well. The existing ductwork could effectively only “move” 4-tons worth of air. Air duct sizing is calculated by how many CFM (Cubic Feet per Minute) they can handle. The existing ductwork was only capable of moving roughly 1600 CFM of air total (4-tons). The 5-ton unit installed by the initial contractor, and quotes from our competitors produces approximately 2,000 CFM.

The result: A 4-ton duct system, connected to a 5-ton unit, on a home that needs 6-tons!

Math is Math, Not an Opinion

For reasons unknown to us, the homeowner had already ruled out one of the contractors. The other remaining contractor assured him, “another 5-ton unit would work fine in his opinion,” adding, “that’s what’s there now.”

The other contractor either didn’t know the ductwork couldn’t handle a 5-ton unit or didn’t care. Experience tells me, he didn’t know how to calculate it… or how to do a load calculation for that matter.

Long story short, the customer witnessed Magic Touch Mechanical do a Manual-J load calculation. In fact, he helped as we went around the home measured windows and doors, insulation levels, etc.

While we did our due diligence, the other company simply went by what was already there – and then “guessed”. The sad part of that is not only was his “opinion” wrong, he was gambling with someone else’s money and comfort.

Think back to when you were learning multiplication in elementary school. Do you ever remember your math teacher telling you to give you an approximate answer? Of course not.

Regardless if you loved or hated math class, one thing you knew to be true was there was an exact answer. You either got it right or wrong, and that depended on how well you used the formula you were taught. The same applies when determining what size air conditioning & heating system a home needs.

You can NOT determine what size air conditioner you need based on square footage!

Let me repeat that because it’s the most important fact in this article: You can’t use a rule of thumb based on square footage to determine what size A/C unit your home needs!

*This is the most common formula I hear in Phoenix. The first time I heard it after moving here from NYC, I said…”WHAT”? Here’s why… 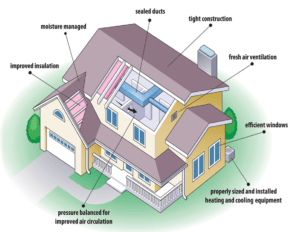 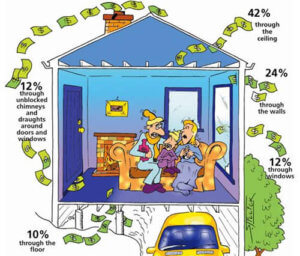 By using a rule of thumb based on square footage alone, both of these homes require the exact same capacity. However, common sense alone tells us that House Ahas significantly more heat “gain” or a bigger heat “load” than House B.

In fact, chances are House A’sheat load is probably 25%, 35%, or maybe higher than House B. By doing a load calculation, we’d may discover House Aneeds a 4-ton unit and House Bneeds a 2-ton unit! By using the rule of thumb, both homes got the wrong unit… and that’s when the homeowners problems start!

Prescription Without Diagnosis is Malpractice

In the healthcare industry, a doctor who prescribes medication without a thorough examination and testing would lose his or her license. While the same should be true in the HVAC industry, it happens all the time. Yet, the hacks keep “practicing” and the homeowners suffer the consequences.

What Happened with the Home That Needed 6.2 Tons?

In this case, the homeowner chose wisely. Magic Touch Mechanical was awarded the contract.

Due to the design of the home, replacing much of the undersized ductwork would have required significant drywall replacement. Not a great option from both a cost and inconvenience standpoint.

We already knew the current duct system was only capable of handling / delivering 4-tons of air. We also knew the home needed 2.2 more tons. So, we created a couple of “what-if” options for the homeowner:

Replace all the windows in the home with dual-pane, low-E windows. It was easy to see what the results would be by changing the window type in our load calculation software. If the homeowner chose this option, with some other minor tweaks, he could reduce the heat load by 2-tons. He could safely choose a 4-ton unit that would work with the current ducts and keep the home comfortable.

Replace the existing 5-ton unit with a 4-ton unit. Install a ductless mini-split system to handle a portion of the load, thereby creating a separate “zone” for the uncomfortable areas.

Not only was Option 2 significantly more affordable, it was also much more convenient. Replacing all of the windows was a fairly major undertaking in this home. Installing a ductless mini-split was a 1-day job, and required no major renovations or demolition.

This is Where it Got Really Interesting!

We removed the existing 5-ton single-stage system and replaced it with a 4-ton variable speed inverter driven system. We also installed new air plenums, duct connections, and other ancillary items included with the new unit.

The following morning, our customer contacted us and said, “the new unit works so much better than the old one did, I don’t think we need the ductless system.”

By the way, one of the reasons it worked so much better was it was now the right sized unit for the ductwork. The homeowner immediately noticed the difference and better comfort with a smaller unit!

Ultimately, we explained that being it was February, the load on the home was low. Come summer in Phoenix however, the home still needed 2 more tons (full load) to maintain comfort & humidity control. “We’d been right so far,” he said, so he agreed we should proceed with the ductless unit also.

I want to point out that we weren’t “right” based on an opinion – we were right because our math was. Sure, we have lots of experience and could do many of the jobs we do blindfolded. However, it’s that experience that tells us to do the load calculation – not guess!

If you’re in the process of planning a new AC unit install or replacing an existing AC unit in the Phoenix Metro area – give Magic Touch a shot! We guarantee you’ll see the difference in our highly-trained consultants from the very beginning!