How to Fix a Drafty House - Magic Touch Mechanical

How to Fix a Drafty House

Fixing a drafty house may be cheaper and easier than you think! 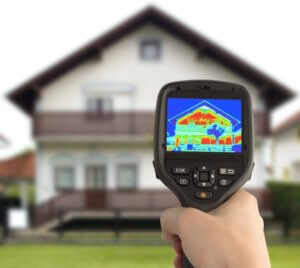 We’re not known for very tough winters here in Phoenix, Arizona. However, we can dip down into the thirty-degree range, which is cold to most, and even colder to us! No matter where you live, a drafty house is uncomfortable and is usually easily fixed.

What Causes a Drafty House?

Before opening my air conditioning & heating company Magic Touch Mechanical, in Mesa, AZ in 1997, I lived in NY. There, we prepared for the winter! We replaced cracked and worn weather stripping around doors & windows and installed storm windows each Fall.

Things are different in Mesa, Arizona. I’ve never even seen a storm window in the 25-years I’ve lived here! Rightfully so as they aren’t needed. Frankly, windows are rarely the problem when we get a call about a drafty house here anyway. Most often, the cause of a drafty house is hidden away where you wouldn’t even know to look – your attic.

Your Homebuilder Doesn’t Know He’s the Main Reason for Your Drafty House!

Home performance contractors use testing equipment to measure the whole home’s “performance”. In a nutshell, we test & record anything that impacts the comfort, efficiency, air quality, health & safety of homes. This typically starts with a home energy audit.

While homebuilders are catching up as buyers increasingly demand more efficient homes, most don’t even know they’re building drafty homes! The main problem is a connection from non-conditioned space to conditioned space. So, the homes design may be where the problem started in the first place.

The Architect is to Blame for Your Drafty House Too!

Architectural features such as plant shelves, arches, varying ceiling heights, etc. are common in newer home design. These features create voids and wall chases that allow cold outdoor air to flow in and out of your home. The result is a drafty house, but the problem is only identifiable and measurable by a home energy auditor.

Both Older and Newer Construction Can Lead to a Drafty House

We just discussed one of the reasons why a newer home can feel drafty, but what about older homes?

Many Magic Touch Mechanical clients who report their home being drafty live in homes that are 10-25 years old. Most complain about hot/cold “spots” or rooms in the house that are less comfortable than the rest of the home.

Many of these homes not only suffer from the air infiltration issues we just discussed, there are usually additional problems. Common examples include:

Attic Insulation Issues– Magic Touch has completed thousands of energy audits throughout the Phoenix metro area. More than half test poorly due to uneven attic insulation levels, misaligned insulation, and believe it or completely uninsulated areas.

Knee-wall Insulation Issues– Knee-walls are vertical walls with conditioned (livable) space on one side and attic or wall chases on the other side. Our energy auditors regularly find completely uninsulated knee-walls! Often, we find insulation originally installed by the homebuilder removed by other workers and never put back in place. Remember that guy that ran all that cable wire, Cat5 computer cable, alarm system wiring, or …? I’d be remiss if I didn’t mention the builder’s A/C contractor or any hired by you or previous homeowners since!

Poor Duct Design & Installation– Having been an HVAC Contractor for as long as I have, this one drives me nuts! A study conducted by NCAEC (North Carolina Alternative Energy Corp.) concluded the following: 90% of the hundreds of replacement air conditioner installations tested, exhibited improper airflow affecting the home’s comfort & efficiency.

Is Your Ductwork a Problem?

PRO TIP: Poor duct design, sizing, and installations are the #1 cause of homeowner comfort complaints we observe in Arizona homes! While not quite the 90% found in the NCAEC’s study, it’s very common to find ductwork that doesn’t comply with even the AC Manufacturer’s specifications.

Other Causes of a Drafty House– Of course, leaky windows & doors, missing or failing weather stripping, and unsealed holes around your home will create drafts. However, the bulk of uncomfortable rooms and drafty homes come from the things that aren’t seen like the examples mentioned.

How to Fix A Drafty Home Permanently

Permanently fixing a drafty home begins with energy efficiency testing. If you live in Phoenix Metro or a nearby city in the valley, schedule an energy audit with us. As BPI Certified Home Analyst’s, we use advanced testing tools and infrared cameras to measure and pinpoint problems. We then generate a detailed report listing the deficiencies found by order of importance. A comprehensive report includes photo’s, measurement readings, repair costs, return on investment estimates, even SIR’s (Savings to Investment Ratio’s).

Once you know which problems to repair first, create a plan with your contractor to have them completed. Your home performance contractor may also provide post repair testing to quantify the improvements remedied the problem. Talk to your contractor about utility rebates and other programs that offset the cost of the repairs. Not only should your drafty home issues be solved, you’ll also improve your homes efficiency – saving you money!